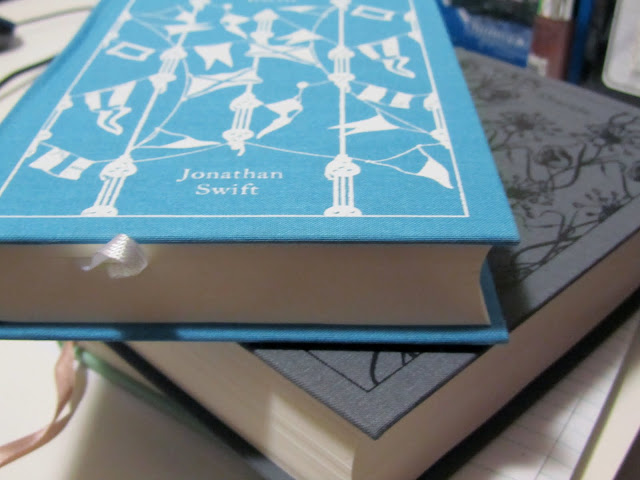 The only Borders store in Western Australia (in Perth CBD) was having their 40% off sale, and I think I found out about it pretty late because so much stuff was gone! Yesterday after my math exam I went into the store and I ran (ermm.. walked briskly?) down the escalator to the MG/YA section and could only find ONE thing I wanted to buy....

Stop in the Name of Pants by Louise Rennison. The Confessions of Georgia Nicolson finale!!! This is one of my favourite series, but don't be fooled by the purple-y grey background on the cover - in real life it's SILVER. Shiny, metallic and everything. Really shiny actually... I didn't take a photo of it because I let my sister keep it in her room (she's currently in her GN phase, reading through the entire series for the first time - she's 24 years old just FYI).
And I saw these Penguin Classics in this awesome format for the first time, with vintage-style patterned fabric hardcovers, which I adore. I bought Gulliver's Travels by J. Swift (the blue one in the picture up top) and Dracula by B. Stoker (the grey one).
I probably splurged a bit too much yesterday - I went and got some summer tops to prepare myself for the Texan/Florida summer (I'll be in Houston in about a week! Yay!), which will be pretty darn hot I hear. Speaking of which, what are the best book stores to visit in the US? I'm thinking cheap, variety, cheap, lots of YA, cheap and mostly cheap.
I'm going to find Uncommon Criminals by Ally Carter... I HAVE to because the Australian covers are crap, and that is an understatement if you've ever seen the American ones.
I'm going to New York, Texas, Kansas City, San Francisco, Orlando and possibly Vegas too. If you have any suggestions on places to go that are really cool in a cultural/historical/fashion-type/not-really-generically-tourist-y sense I'd LOVE to hear them! :)
Happy Friday and TGIF! Not really T-ing G I F because I have 3 boring chemical engineering exams to study for next week. :( Wish me luck.
Posted by Unknown at 6:32 PM

I love the penguin classics they look so nice as a whole collection, a friend of mine has the whole Jane Austen collection in hardcover their so pretty! I'm a real sucker for pretty covers.
great post!
- abbeys bookshelf

Those penguin classics do look awesome. It's sad that all the Borders stores are closing. I didn't get to go to the one closing in Adelaide =(. Happy Reading
Ange @ the Moonlight Reader

Oh, I do love those Penguin Classics - they look adorable and make me want to but them cause they'd look pretty darn nifty on my shelf! There are a few classics I've been meaning to get around to reading so maybe when I get them, I'll get these (PPP) pretty patterned penguin ones. :)