my thoughts on: the lover's dictionary by david levithan 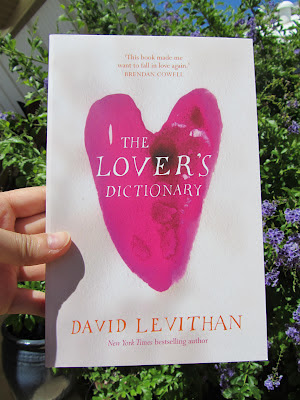 This is a novel written in the format of a dictionary. Dictionary entries for words, listed in alphabetical order and pertaining to the romantic relationship between two people. The concept of writing a story in the style of a dictionary is really unique. I can appreciate the difficulty one would be faced with having to create a narrative within the restrictions of a certain format. David Levithan did it superbly. Superbly.

I struggled to connect with the characters a bit, especially in the first half of the book. The structure of the story (despite having a distinct order) is extremely disjointed. The reader only gets glimpses of scenes, fragments of dialogue, individual moments sitting on their own. That's one of the main reasons why I felt that disconnect. Another reason would be because of the nameless, faceless characters. I don't know who the "I" or the "you" were. Identities were so vague I felt like without names I needed to concentrate more on what was happening and to whom, and who was saying what to whom. I just wasn't unable to invest in these characters. The obscurity of it all gave the whole book an air and notion of being inside someone's dream. Which wasn't bad, exactly. Especially with David's almost poetic writing style.

The story and characters felt very real and contemporary. It's told in 1st person POV, and at first I was absolutely sure this wasn't a YA book because of the way the narrator spoke. So mature, so educated, so experienced. In fact I'm still not sure if this is a YA book or not. Probably not.
See? This is the result of the story being told not in chronological order. Confusion.

This book is filled with romance. There's a fair bit of speculation on love and romantic relationships. But for me it seemed just like pronouns dancing around on a page. Pronouns doing a foxtrot with many other words.
But I can't finish this post without saying that in all truth, the dance was beautiful.

Wow, a book in the form of a dictionary? I've never heard anything like that before. And I can see how you'd be confused and not be able to connect to the story with it written like that.
Great review:)

This one sounds unique, pertaining to the format of the book. Definitely sounds a little confusing though, but glad to see you enjoyed it. Great review!

Rabiah
Confessions of a Readaholic

Amazing! I've never heard or seen like that before. A book in a form of dictionary?surely lots of people out there will gonna be curious and will surely love to buy this book including me.
Thanks for sharing this wonderful post of yours!