my thoughts on: INSURGENT by Veronica Roth 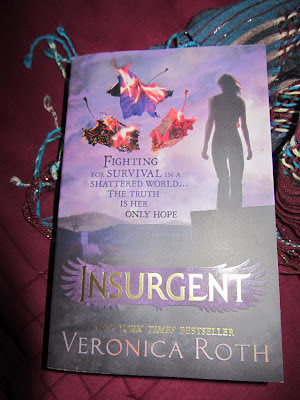 This sequel to Divergent did not disappoint... but I can't say it was equal to or better than its predecessor, either.
To its credit, the ending of this Roth novel once again had me gripping my seat with nervous, inexplicable anticipation. It was action-packed, intense, and OH-MY-GOSH the very last page literally made me gasp, my mouth went into a O-shape and my hand slammed over it.
Anyway, let's talk about the other parts of the book.

I'm gonna try not to give away any major spoilers. The book begins with Tris with Tobias, Caleb, and Marcus on the train, following on from exactly where Divergent concluded. There's a lot of uncertain things going on, for example what happens to the Dauntless faction now that the simulation attack is over and everyone has woken up from it, what happens to the surviving Abnegation, and what stance will the other factions take in this fight?

I won't go into the nitty gritty, that's what reading the book is for. But I'll just briefly mention that Insurgent lets the reader in on the other factions - Amity, Candor and Erudite - a lot more than in Divergent, which focused on Abnegation and Dauntless more than anything. So for me it was extremely interesting to find out more about those other factions, and also meet some awesome new characters along the way - such as Johanna (the unofficial main leader of Amity), and Fernando (a non-evil Erudite who didn't get as much page-time as I expected).

There is so much struggle in Insurgent. Tris struggles immensely and in a million different ways. One of her main obstacles was self-forgiveness. She spends almost the entire book beating herself up about killing Will. It becomes a weakness, a big weakness. One that I hate seeing in Tris because the main thing I came to love about her was how strong she was in every situation. But in this book the memory of Will eats away at her and she becomes so gun-shy that she can barely even touch one let alone shoot it.

Tris's other main struggle was with Tobias. Which really sucks, because the best things that happen in this trilogy happen when Tris and Tobias are together. United as one, in their goals and in their decisions. Unfortunately there is little of this in Insurgent because Tris and Tobias have trouble trusting each other. SUCKS, right? But it actually made the very end so much sweeter, for me.

In this second instalment I got to see old characters in new light - lots of them in a better light than previously, such as Lynn, Christina, Uriah, Peter (yes, Peter!), and Marcus, dare I say it.
And then I saw one or two fall from my good graces, but I won't mention their names, it might be too spoiler-ish.

If you loved Divergent as much as I did, you have to have to HAVE TO read Insurgent! Amidst the struggle you learn a lot about their society and more about them, as characters. And the ending! Oh, I adored the ending.

Hi!
I'm glad you liked Insurgent so much! I loved Divergent, but Insurgent, though amazing, disappointed me.

Make sure you get yourself a copy of Trying War! It's brilliant- just as much so as Chasing Odysseus!
Romi.x