The Time Will Come #1

This is a Thursday book meme which began at Books for Company, where we pick a book we've been meaning to read but haven't got around to yet, one that's been sitting on our shelf gathering dust for a while...
So this is a great meme for me, because I have loads of those! 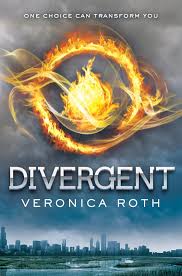 Synopsis:
Beatrice "Tris" Prior has reached the fateful age of sixteen, the stage at which teenagers in Veronica Roth's dystopian Chicago must select which of five factions to join for life.
Each faction represents a virtue: Candor, Abnegation, Dauntless, Amity, and Erudite. To the surprise of herself and her selfless Abnegation family, she chooses Dauntless, the path of courage. Her choice exposes her to the demanding, violent initiation rites of this group, but it also threatens to expose a personal secret that could place in mortal danger.


When Divergent came out a couple months ago, I read all the raving reviews and immediately ordered it online.
I know it's going to be fantastic, so I might get my sister to read it first, and assuming it's as great as everyone says, she'll deliver the buzz firsthand and I'll be even more hyped up to read it. Well, hopefully hyped up enough to bump it to the very top of my TBR.
I let my sister read my copy of The Hunger Games before I read it and that was exactly what happened, so I'm guessing the method will work well again ;)
If you've read Divergent already, did it rock your socks?
Posted by Unknown at 9:20 AM

Labels: The Time Will Come

Hi, I think you should give Divergent a go, I wasn't to sure of it when I first picked it up, but once I did I didn't put it down until I was finished with it. I loved it :)

I've been wondering wether i should read this or not as well. I think i might give it a go later on.
:)

I read it an LOVED it. It completely rocked my socks and no stupid cliffhanger ending that is so common nowadays...read it!