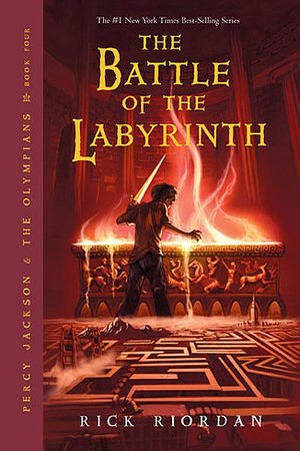 Woah. Okay, just let me pause for a minute to gather my thoughts.

I can't believe this series is only five books long! I feel like there are just so many more adventures to be had. But I guess that's what the Heroes of Olympus series is for. Percy when he's older, right? I'm so looking forward to getting my hands on those books.
Anyway back to this book - it was all the fun and danger and action and heroic adventurous epic-ness that you would expect from Rick Riordan. I just love this story so much. Or rather, this whole series.


The characters were great to read as usual, the 'oldies but goodies' were there - Percy, Chiron, Annabeth, Tyson, Grover - but many of the new characters who were in this book were monsters or other evil characters who sided with Luke & Kronos, with the exception of Daedalus the inventor (and creator of the Labyrinth), Briares the Hundred-Handed One, Mrs O'Leary the hellhound, and Rachel Elizabeth Dare (mortal with clear sight), all of whom were good characters, at least for the most part.

I kept imagining how great this story would look in film format, but I kinda doubt that would happen (a movie adaptation that is). At least not any time soon I think. There's just such wonderful scenery and sight-seeing and world-building that goes on in this book, like for example I would love to see how they would recreate the Labyrinth (being able to see steel corridors turn to ancient marble pathways to red brick roads to dirt tracks) or the scene with Pan in the crystal cave or Daedalus' workshop overlooking the Rocky Mountains in Colorado or Alcatraz prison in San Francisco or Calypso's island with the moonlace flowers. It would have been amazing movie if done right.

I also loved the little throwback to Hercules' Labour of having to clean the stables. Percy was tasked to clean Geryon's stables, which contained a lot of smelly horse dung. And that's putting it very lightly. Oh, and did I mention the horses were flesh-eating creatures as well? Anyway, I loved the way Percy handled that situation. Especially with the river nymph. It really was a job well done and worthy of his father Poseidon's superlative favour.

It was also quite nice to see a little development of Percy and Annabeth's relationship - hopefully Annabeth finds some clarity soon and stops pining for Luke's soul to be saved (at this point Luke seems far beyond saving) and realises Percy is right there and he's infinitely, way better.

If I had to be a little picky I probably would give this one 4.5 stars and not 5 (because I think Book 2 and 3 were perhaps a bit better (I can hardly remember Book 1)), but this book is part of a greater story, a greater series, and the series as a whole is just so enjoyable and makes me so happy to read that I can't but feel generous enough to award it the full prize. It's like giving me an extra slice of a delicious pizza I know I could easily not have tasted in the first place.
Perfect analogy.
Yep.