I saw this book tag floating around the YouTubez and it looked really easy and fun to do so I did it!

I wasn't tagged by anybody, but I tag all of you!

Books mentioned:
Ariel by Sylvia Plath
Rhubarb by Craig Silvey
I'd Tell You I Love You But Then I'd Have to Kill You by Ally Carter
Entangled by Cat Clarke
Lola & the Boy Next Door by Stephanie Perkins
The Lion, the Witch and the Wardrobe by C.S. Lewis
Eragon by Christopher Paolini 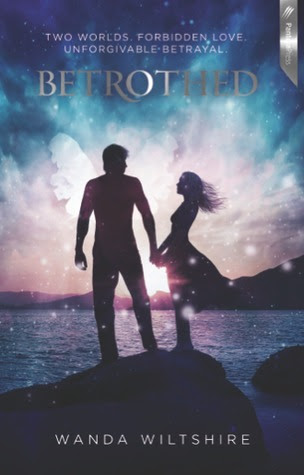 Betrothed by Wanda Wiltshire
goodreads page
(If you live in/near Sydney, Wanda's book launch is happening at Dymocks on George St on June 27)

Betrothed is Australian author Wanda Wiltshire's debut novel - it is being released on July 1st, 2013 and I was so kindly sent a copy from Pantera Press.
Fortunately, I read it as soon as I received it and I really enjoyed it (it was a lovely distraction from working on my research essays) - but unfortunately, that was about a month ago and I can't believe I kept putting off posting my thoughts on it for so long.
But now the day has come, the release date is drawing near, and if you enjoy reading YA fantasy, I encourage you to go online, or to Dymocks, or wherever you have to go to get your little (or big, I don't know what size your hands are) hands on this excellent debut novel.
I wrote a brief Goodreads review shortly after I finished reading Betrothed so it has more of my immediate feelings - check that out here.

Betrothed is half set in the real world - modern day Australia, and half set in Faera - the world of fae (or faeries). This was really interesting because the main character, Amy (aka Marla) sits on the edge of both worlds. She gets the best (and worse) of both worlds. Hannah Montana theme song reference not intended. She grew up in Australia, but she isn't human, and therefore not exactly meant for this world. Marla is fae, and her betrothed - Leif - is a fae prince. She meets him in her dream. It's crazy but there's an explanation I won't go into because I'm no good at plot retell and I'd end up rambling for way too long. You just have to read it!
The mix of fantasy and reality was really nice to see because normally you only have one or the other. Amy/Marla has her human friends and (adopted) family who all love her so much, but she doesn't belong in the human world - she belongs with her betrothed, she belongs in the realm of fae. She also longs to find her biological mum and dad - her fae parents who abandoned her.
Faera was an exciting, enchanting place to read about. There are just so many exciting, enchanting things in this book! Marla's wings, the markets in Faera, the royal court, Leif in general....
I was not happy with the ending, but only in that the ending was not a happy one. Things weren't resolved very nicely but it is a series after all, so the ending just made me want to read more and get hold of the sequel (Allegiance) right away.
There's little for me to criticise - hmm I guess some of the dialogue seemed to me a bit unrealistic at times (I know the faeries all speak like they're ancient and that's fine, but I meant dialogue between humans), and beware, there is a love triangle going on but don't worry, the winner is victorious from the get go.

Click here to see my Goodreads review of Betrothed

The Tale of Despereaux by Kate DiCamillo 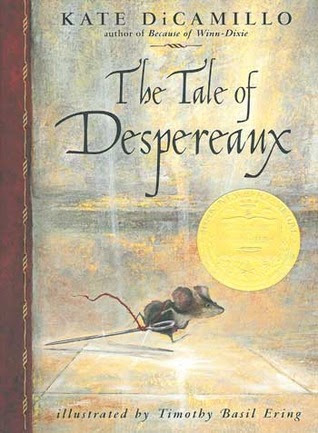 The Tale of Despereaux being the story of a mouse, a princess, some soup, and a spool of thread by Kate DiCamillo

Thank you to my lovely book blogger pal Jess for giving me this copy. It's the hardcover edition with ripped page edges and it's beautiful.

This was a super quick read, and definitely a thousand times better than the film adaptation.
The narrator tells the story in second person - to you, the reader! Or to me, as it were. It was a change from most of the books I've read in the past and I welcomed it.
The main difference between the film and the book is the character of Roscuro. In the movie he is portrayed as quite benevolent, friendly and innocent, whilst in the book he is much more hard-hearted and just... evil.
Apart from the murderous, duplicitous rats, the characters were cute and lovely to read, and even quite touching in parts - especially in the chapter where Despereaux forgives his father for sending him to the dungeons to be eaten by the rats.
Although I enjoyed reading this out loud, I would not read this to young children because the rat-side of the plot (and even the Miggery Sow-side of the plot) was really quite dark and might be too scary for the younger kids. Perhaps in a primary school class-setting it would be a little better... but not in a bedtime story evening setting reading to 5 year olds because they will most likely have nightmares filled with rats and dungeons and darkness and murder.

The Sea of Monsters (PJ&O#2) by Rick Riordan 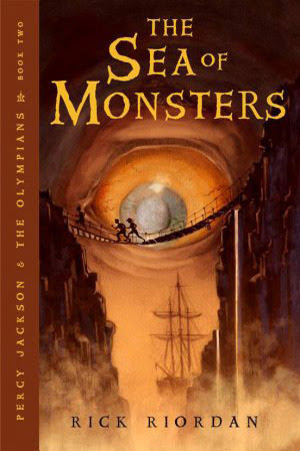 WHEE!!! I'm only two books in but that's more than enough words read to make me a HUGE fan of this series.
I love this series.
A lot.
Rick Riordan is an excellent writer and I literally want to get every single book from every single series of his.
I would eat these books for breakfast if that was a thing people did.
(You don't have to tell me, I know. I'm weird.)

Anyway, I loved Percy's little-but-not-so-little half-brother (and cyclops) Tyson! He was cute. Not physically, though. And he proved to be incredibly instrumental along the quest. I'd love to have Percy Jackson as my brother but I'd equally love to have Tyson as my brother too. They're both so loyal and pure-hearted, and just really good characters.
Also, Poseidon really isn't a bad dad to have either.
And also, I wanna ride on a Hippocampus!

I really enjoyed the 'quest-within-a-bigger-story' thing that was going on. In other words, there was the immediate quest of rescuing Grover from Polyphemus and getting the Golden Fleece to save Camp Half Blood and cure Thalia's tree, but then there is also the bigger picture - Kronos' plan to destroy Olympus and all of Western civilisation. Luke is working for Kronos and building an army for the evil titan, assembling the pieces of his body... BLURGH, how gross. And then also in the bigger picture there's the prophecy. Well, Kronos and the prophecy are woven together, because Kronos is dependent on it.

And then the cliff-hanger... oh goodness.
*spoiler alert*
I feel like havoc is bound to be wreaked in the next book with the whole "Thalia-is-back!" situation.
Is Percy supposed to feel threatened by Thalia now? Or safer, because there's less pressure on him to fulfill the prophecy. Or scared, because they're worried Thalia might side with Kronos?
Anyway, Annabeth said Thalia and Percy were practically the same person.

I don't know when I'll be able to read the next book, because I'm currently under a book-buy-ban. And I have plenty of other books on my shelves waiting to be read first.

I saw JesseTheReader do this on his channel and it looked like so much fun so I had to do it too!
No one tags me to do these things. But I do them anyway.
HA!
Posted by Unknown at 3:34 PM 0 comments

Then by Morris Gleitzman 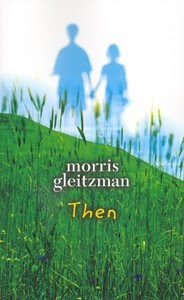 Reading Then brought back all the memories I have from Year 10 English class - reading Once for the first time, The Book Thief, The Boy in the Striped Pyjamas... doing our group oral presentation on WW2 novels with my friends Liz and Chulodi... (we got amazing scores for it, woohoo! Thanks, Mrs Murphy).
I hadn't read Then back then, but I knew it would be much like its predecessor and I went into it knowing very well that the story would be a sad one.

I think reading these kind of stories - especially as they're children's stories - as an adult, puts things more into perspective and made me perceive the tragedy of WW2 so much clearer.
For some strange reason, I really enjoy reading out loud, even when no one is around. I do this whenever I feel like it or whenever possible, especially with children's books (well, Middle Grade.. I don't really read younger kids' literature). And I read a fair bit of Then aloud to myself too. At some points I actually had to stop because it was choking me up. Sometimes I feel like children's books should never be this sad or such a downer... but at the same time it's clear this series is a masterpiece and addresses the tragic topic beautifully and heartachingly accurately.

I could really go on and on talking about Felix and Zelda, and their family situation/Nazi situation, etc, but I don't think I need to. Felix is young - really young - and the things he goes through and has to deal with is incredible, tragic, heartbreaking, unfair... I've covered it and you'll have/will read it, let's move on.

I read Then when I should have been writing my research essays, but it didn't take a lot of time to read because the writing was so clear and simple (still poignant though) and the story was not a long one.
I would suggest everyone read Once, or Then, or both - unless you're scared of crying.

It's video time again. Just because I can.

(Reviews coming up soon!):
Betrothed by Wanda Wiltshire
The Tale of Despereaux by Kate DiCamillo
Then by Morris Gleitzman

Hope you enjoyed the video!
Posted by Unknown at 11:44 AM 0 comments