While my bank account, general life spirit and joie de vivre whittles itself down from pathetic to practically non-existent, I'm finding myself left with merely empty wishes and dreams.

So to kick-off from that delightful introductory sentence, this post is going to be filled with books that I want on my bookshelf, but can't afford to go out and buy at the moment. (I tend not to borrow books from the library, not because I'm a snob for cleanliness but because I have too many books on my shelves left unread)
Let's get this thang going.

A Corner of White by Jaclyn Moriarty
I've been waiting for this Kingdom of Cello thing to be released ever since Dreaming of Amelia came out! Jaclyn Moriarty is one of my favourite authors.. like, EVER. Her YA Contemporary novels (the Ashbury series) leave me in stitches so adding fantasy into the equation?.... will probably make me pee my pants. And then explode. That is how much I love Jaclyn Moriarty's books.

The Husband's Secret by Liane Moriarty
After reading What Alice Forgot, Liane Moriarty immediately joined her sister up there at the top of my list of faves. I went and bought all of Liane's other novels (I haven't read em yet but I need to, ASAP!) way back when, and now that this new one's out, I'm itching to get my little hands on it.

Perfect Scoundrels by Ally Carter
There's been quite a long wait between Heist Society #2 and Heist Society #3 (this book). I absolutely LOVED Ally Carter ever since the beginning of the Gallagher Girls series. I actually first found out about Ally Carter from MySpace! THAT WAS THE DINOSAUR AGE, PEOPLE!!!
Normally I'm quick about getting my hands on the new releases of her books, but for some reason I forgot about this or didn't realise it had been released, and now I'm late on the bandwagon!

The Titan's Curse by Rick Riordan
I read Percy Jackson and the Lightning Thief early this year when I was vacationing overseas... in fact I bought the first and the second books of the series for pretty cheap when I was in the Strand bookstore in NYC. I know I'm going to love the entire series even though I haven't read the second one yet. The Titan's Curse is the third, and I want it! I will probably end up getting ALLLLLLLL of them. Eventually.

Goodness me. I have a lot of thoughts about this book. They're all floating around in my head. Sometimes I can grasp them and form them into sentences. It's like fishing, the way my mind works. You catch em, you let em go. It's a jumble and it's a jungle. Not really. I just said jungle because it matched poetically with jumble. If my mind is like fishing it can't be a jungle too, can it? More like a swamp.
OH I DON'T KNOW WHAT I'M SAYING ANYMORE!
I guess what I'm trying to say is I don't know how to form this post in a coherent way because all my thoughts about this book are quite random and don't seem to flow well onto each other.
Maybe I'll make some lists again!

I think a lot of people liked Lola & the Boy Next Door a lot more than I did. Base off of Goodreads ratings and my friends on Goodreads' ratings/reviews.
Why is this?
Perhaps it was Lola.

Well, despite the 'low' ratings I saw for Wedding Night on Goodreads - I was once again thrown into the wonderful world of Sophie Kinsella.
The magic and beauty of literature is that it allows your spirit to be dynamically shifted by merely looking at the words on a page.
In every Sophie Kinsella book I have read - my mood is lifted, I end up crying, and there is always, always a happy ending. For Wedding Night however, it wasn't a happy ending. It was a BEST ending. Literally, the outcome could not have possibly turned out better for the characters.

You may be wondering why I only gave it a four star rating instead of the usual 4.5 or 5 I normally award S.K. books, so I'm going to tell you why.

The characters were lovely; I did like them a lot, and it was really cool (and necessary) to switch between the narrators Lottie and Fliss, but the hero/s and heroine/s didn't exactly have the (for lack of a better term) epic-ness that past S.K. characters had. A reason why I may have felt this is that the characters in Wedding Night are a fair bit older... Lottie is 33 years old and Fliss is 38. Lottie is all about settling down and Fliss has a 7 year old son and is getting through her divorce. Of course we still get packs and packs of crazy behaviour from the protagonists and lucky for us there are two of them. Double trouble!

The plot didn't have as many layers as I was expecting/hoping for... normally with S.K. you get a huge scandal simmering away underneath the upper layers of plottiness and relationshippy romance stuff. Wedding Night didn't really have that, although that doesn't mean there weren't any heart-wrenching, sob-inducing moments, coz there were a few of those. For example when Fliss has her breakdown in the hotel and Lorcan ushers her into the steamroom to cry it out, or when Richard goes to Arthur to find out about the fire that happened fifteen years ago all to soothe away Lottie's fears, or when he walks up to Lottie on the beachside on Ikinos island and tells Lottie he loves her even though all the hotel guests are watching and her husband is standing right there.

Wedding Night was a funny, light and easy read that still brought out of the all the emotions. So for that I give it full props! Sophie Kinsella still remains one of my favourite authors and I would still recommend this book even though it is not the best S.K. novel out there.

Bonus feature!
Watch me fail at talking about this book!

new on my bookshelf : wedding night 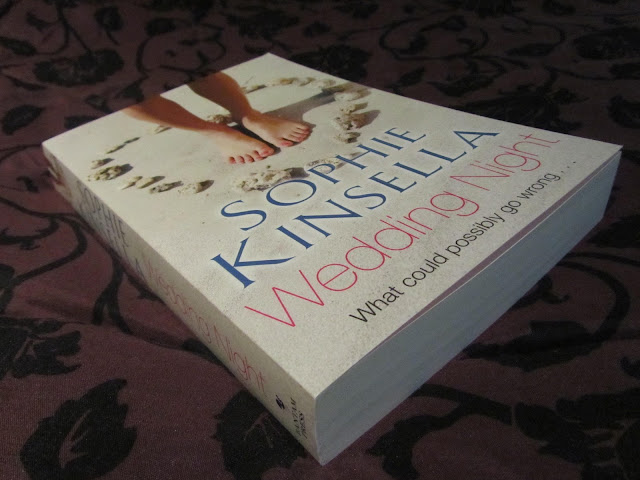 I was in Big W today and found this lovely new novel by Miss Kinsella - who, as you should well know by now, is one of my favourite authors of all time.
I will probably start reading Wedding Night TONIGHT.

Here is the Goodreads page for the book in case you need a lil bit more info/love Sophie Kinsella and didn't realise she had a new book out.
OMG I just hopped onto Wedding Night's Goodreads page... I can't believe the ratings are so low!
I really hope I enjoy this one as much as ALL her others (because I have literally read all of her other books and none disappointed me in the slightest).

Alrighty so that is what's new on my bookshelf - you might be seeing a review soon ;) but 'til then
PEACE OUT, SAAAAAAN!
(PVP Dope Fresh Nation reference)
Posted by Unknown at 11:00 PM 0 comments 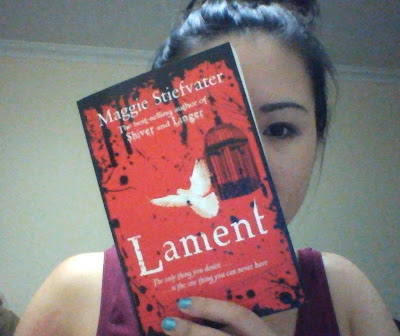 I wanted to really like this book, and I wanted so much to fall into the story and be immersed in it and feel a strong connection with the characters... but unfortunately that didn't happen. I also wanted to enjoy the writing but that didn't happen either.
This review is gonna be a few paragraphs and two lists. Normally I would ramble but I don't wanna do that for this book because it might turn out like a complain-y negative rant.

So first I'll tell you a bit about the story and then list the things I liked and the things I disliked about Lament.
The story is about this sixteen year old girl Deirdre (or Dee) who is a really talented musician with a frankly boring personality. She hates compliments (everyone has always told her how amazingly talented she is as a harpist and how wonderful her voice is, blahblahblah) and she is OCD about scooping icecream. Oh and she  always throws up before a performance due to nerves. Like, every time.
The book begins when she's at a musical performance competition and she MEETS THE GUY FROM HER DREAMS. He appears as she's vomiting in the bathroom and he holds her hair back. (lol) The author doesn't even establish what he was doing in her dreams in the first place. Anyway, they end up performing together (his name is Luke and he plays the flute) and take out the competition.
I think Dee realises from the get go that there's something strange about this Luke guy. But soon she also realises there is something strange about HERSELF. She is a cloverhand. The blurb of the book says that means she can see faeries, which I don't think is explained the same way in the novel, but oh well. Dee is being stalked by faeries left, right and centre; finding four-leaf clovers EVERYWHERE. Dee nicknames one particularly creepy faerie-stalker "Freckle Freak". She also finds out that she has telekinesis and is telepathic too. Which is useful, I guess. None of this makes her character any more interesting though, sadly.
I suppose you can already guess that Luke and Dee fall in love, BLAHBLAHBLAH. He saves her loads of times, she saves him, happy ending.
After typing out that sentence, I pretty much don't have anything left to explain to you about the story.

TIME FOR THE LISTS!

Things I liked about Lament:
1) The character of James, Dee's oldest and bestest friend. Whom Dee does not deserve.
2) Remember Freckle Freak? Well, Dee ended up killing him with an iron nail which led to him exploding into FLOWERS. I would love to see this moment adapted to screen.
3) The focus on music. I love music. Music is quite central to the paranormalcy of the story and to faerie-culture, which I haven't seen a lot of in other re-tellings of fey folklore. Music is definitely a force.
4) The cover. I like the colour combo or white, black and RED. I like the splattery paint blobs, the musical notation, the dove and the cage. I don't like the tagline, however.

Things I disliked about Lament:
1) Maggie Stiefvater's writing - the imagery, the dialogue, the lack of speech tags, I just had so many problems with it. The writing didn't flow for me because every other page I would have to stop and just be awestruck by how nonsensical/unrealistic/tacky the writing would be. Sorry, Maggie. I do like you as a person!
2) The characters (bar James). I didn't particularly like Deirdre or Luke, or their relationship (which seemed forced and frankly unbelievable). But most of my loathing is directed towards Delia, the evil aunt. She wasn't hashed out very well - she was definitely presented as the ultimate villain, YET she was NOT the antagonist to Dee the protagonist. The Queen was.

Now it may seem from the lists above that I liked the book more than I disliked it, but honestly in terms of importance - writing style and characterisation trump those four other things by MILES. I'm bummed I didn't enjoy the writing and that the characters weren't more endearing, but unfortunately that's the general impression I got from the book. :(

My STAR Rating: THREE STARS (out of five, obvz!)