Cathy and Heathcliff, you crazy kids! (My Wuthering Heights Journey #1)

This week is my study week, and I'm taking this time to read Wuthering Heights and to re-read Frankenstein for class. I'm approximately one third of the way through Wuthering Heights at this very moment. I decided to write this post in order to document my thought process through my reading journey of Wuthering Heights. So at the outset I must warn you that things might get strange. Also, because I haven't finished reading the book, I definitely do not pretend to have full understanding of the characters, events, or generally anything that's happening so far. But hopefully this might be interesting enough to either a) entice those who haven't thought of reading Wuthering Heights to give it a go; or b) entertain those who've read it already if only in the slightest degree (maybe they had thought these same things too!). Note: there will be spoilers.

Here's my copy of Wuthering Heights. 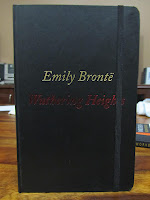 I bought it about 3 years ago but never mustered up enough determination to read it. Other than that one time back then when I failed dismally (i.e., in the first few pages). I started reading it again yesterday; this time finding it much easier to digest. I actually woke up this morning eager to read more of it.
My edition by Cameron House publishing has got this really helpful list of characters at the front of the book. And it's illustrated!! Reading the little bios of each character helped me get into the story A LOT. 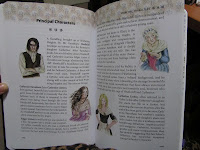 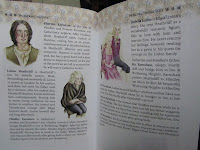 OK, so currently I'm in Chapter 10 or thereabouts, and I need to comment on some really weird things that have happened so far in the story. From the word go, I found Heathcliff, as a fictional character who is also a human being, to be rather dubious. Dodgy, to say the least. He sort of just enters the story from nowhere. For someone who passionately loves (Catherine, that is), his heart seems quite demonstratively hard. Or broken. Sometimes even non-existent. I'm yet to form a solid opinion about him. But for now all I can say is he is super dubious. On the other hand, if I was in love with as mental a person as Catherine Earnshaw, I would be quite messed up in the head too.
One thing I don't understand yet is why Heathcliff ran away (literally) for three whole years after he heard Cathy say that she can't marry him? Grow a pair of balls, gypsy boy. And on top of that, he only heard that because he was eavesdropping on a private conversation and what he heard was out of context. The main thing I don't understand about it is why he didn't bother to win Catherine back and stop her from marrying LOSER LINTON. But no. He left, and his absence only made it easier for Cathy to marry the wrong person.

Next thing I want to address is the Crazy Cathy ordeal in Chapter 8. This is what happens, more or less.
Cathy invites Edgar Linton over to her house to hang out or something.
Nelly, the housekeeper, is not allowed to leave Cathy alone when meeting with visitors (as per Hindley's instruction).
So Nelly is cleaning and shizz, being nice and subtle about staying in the room with Cathy when Edgar Linton enters.
Cathy tries to get Nelly to leave, but she makes up excuses not to.
Cathy gets really angry, and PINCHES Nelly on the arm, really painfully.
Nelly cries out, saying Cathy has no right to treat her that way.
Cathy immediately denies pinching Nelly.
A row between them is going on now, and Cathy ends up slapping Nelly across the face.
Edgar stands there, watching the whole thing play out.
The baby who was sitting in the corner of the room starts crying because Nelly is crying.
Cathy goes over to the baby, grabs his shoulders and shakes him.
Edgar decides it's time to do something and goes over to Cathy...
Cathy slaps him across the face too.
He tries to leave but Cathy starts weeping and begs him to stay.
Linton stays.
Then he proposes.

(WHAT?)
Yes. You  read correctly. Let's just mull that one over for a little while.

My next post in the JOURNEY will probably be up in a day or two.
Posted by Unknown at 1:52 AM