A Corner of White by Jaclyn Moriarty 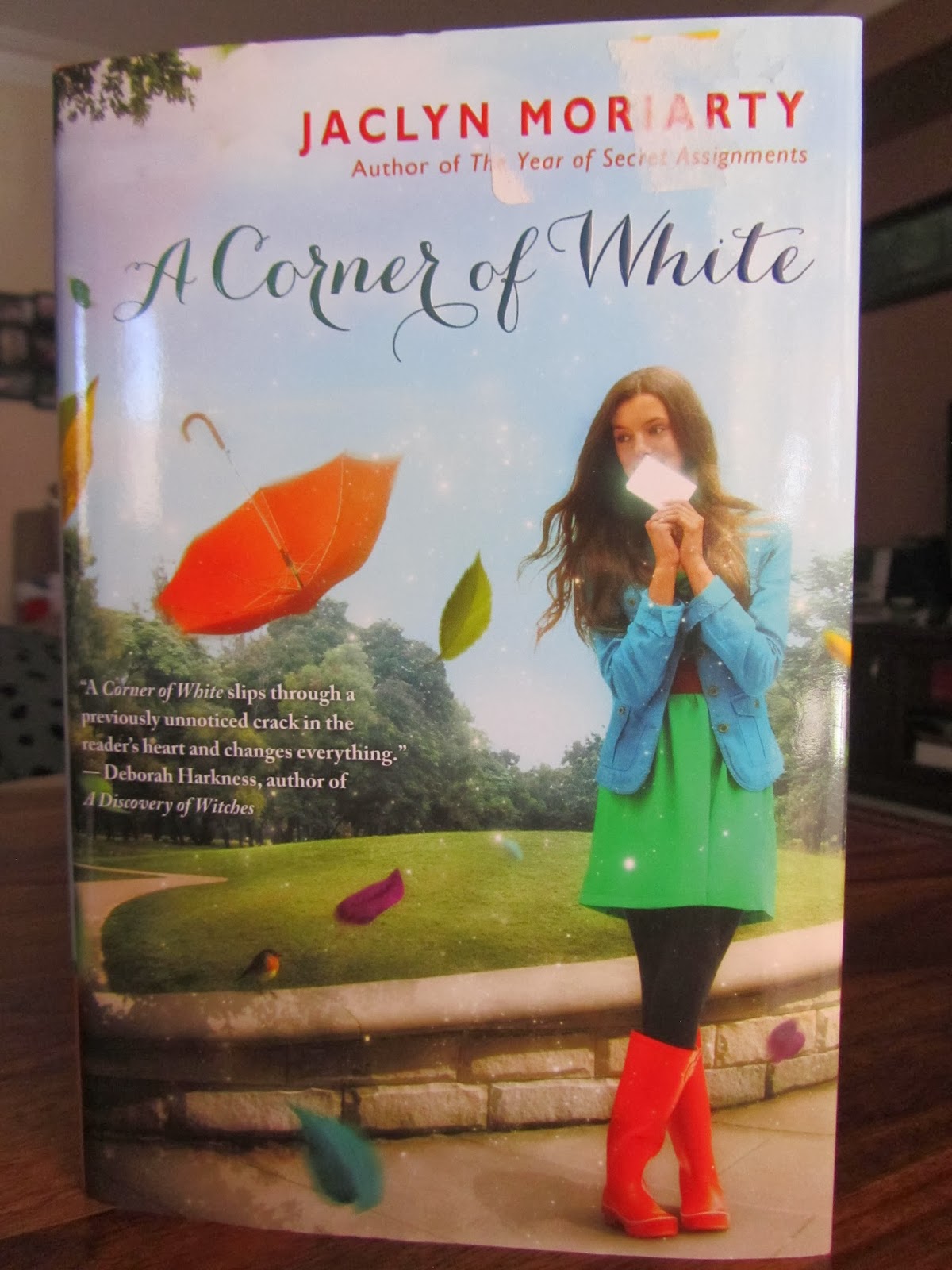 A Corner of White by Jaclyn Moriarty
click through to Goodreads
My rating: 5 stars!

A Corner of White is the first book in the series "The Colours of Madeleine" (or "The Colors of Madeleine" if you're American) by Australian author Jaclyn Moriarty.
In case you are a new reader of Chimneys and Magic, you might know her as one of my all time favourite authors, whose writing, stories, characters, imagination and words I greatly admire. She wrote Finding Cassie Crazy (the first book of hers I read back in high school), The Betrayal of Bindy MacKenzie, Feeling Sorry for Celia and Dreaming of Amelia (most of these novels have various other titles in nations abroad), as well as a handful of other adult novels. Jaclyn Moriarty led me straight to her sister Liane Moriarty, who also fast become one of my favourite authors ever, especially due to What Alice Forgot (which was the first novel of hers I read). Anyway, enough babbling on about authors and such, there's so much I have to say about this book so let's get a-moving.

This book. I don't even know how to put my thoughts into sentences.
This book wow-ed me, charmed me, it practically wooed me. It was everything I expected from this all-time favourite author of mine, and much, much more. It was the delightful characterisations, the witty writing, the wonderful plot journey, but woven so beautifully and tightly so that by the time I came to the end of it, I felt utterly and completely, perfectly satisfied. Like a warm cozy blanket was thrown over me by a very important person who honestly had better things to do with their time, but wanted to make sure I was comfortable.

I don't know how to begin to describe the awe-inspiring imagination that birthed this story. Contemporary reality mixed with a good amount of fantasy (by 'good amount' I mean a large amount) and some added splashes of mystery and adventure made for a delicious, hearty storyline. There is Madeleine - who lives in Cambridge, England, the World, and then there is Elliot - who lives in Bonfire, the Farms, in the Kingdom of Cello. I wish I had the ability to tell you about everything in the book, all the characters (of which there are many) and all the myriad marvellous happenings. I could also endeavour to describe to you the role of Colors and colours, the premise of the mystery, and all of that, but I couldn't do it justice, so you'll just have to pick up the book and read it. You won't regret it! (I hope).

I'm kinda having a bit of a struggle in my efforts to write down all my thoughts and I think I've come to the conclusion that it's just not going to happen. I am stuck for words. This book I guess just leaves me speechless (in an awestruck way; dumbfounded not confounded). I know that some people who've read it seem to not grasp the full wonder and beauty that has come out of Jaclyn Moriarty's imagination, especially as it is set in the present and strong elements of realism and fantasy join at a meeting point, and some even thought the story unravelled at too slow a pace (which, in my humble opinion, is preposterous!).

I loved that the novel used dual spelling/grammar - both British and American (British when we were in Cambridge and American grammar in the Kingdom of Cello). Little details and accuracies make me very happy, like the difference between 'toward' and 'towards'. But this was especially important when talking about regular colours and the more corporeal Colors or Color attacks in Cello.

Although I slightly resent the fact that I took so long to get my hands on the book (it was released in 2012!), I am glad I only just read it now because the second book The Cracks in the Kingdom, was released just two days ago! I won't be getting it straight away because I need to wait a couple of weeks for the US hardback version to be available (I need my books to match one another - I bought A Corner of White in hardback at Half Price Books in Houston for only $8.99! What a steal! So obviously I couldn't go out and get a paperback of the sequel, could I?)

There is so much more I could speak about but I won't, mainly because it's like 40 degrees C weather and I'm hot and tired and honestly a bit lazy. But seriously though, YOU NEED TO READ THIS BOOK.
If it doesn't amaze you, and if you don't like it, then you, my friend, need a literary tongue transplant, because you're taste fails you.
Posted by Unknown at 4:58 PM