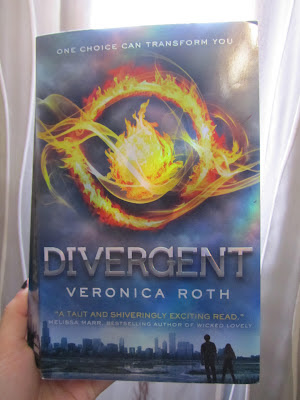 I had this book sitting on my shelf for way, WAY too long. I waited way too long to read it.
I bought this online back when I was still studying engineering! Which seems like ages ago. It was almost a year ago.
I remember this because I was at uni really early in the morning in the maths computer labs because I needed to work on my stupid Process assignment. I was on the internet reading book blogs instead and I read like, one measly review (or rather, epic review) of Divergent and ordered it immediately. Right then and there.
One year later, here we are. 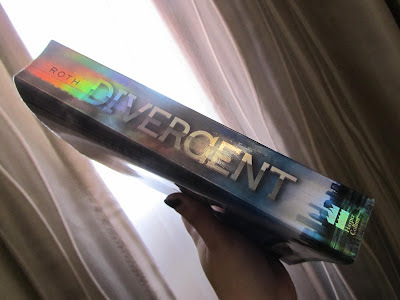 I just watched a review of divergent on Youtube by one of my favourite beauty girls Elle Fowler, aka AllThatGlitters21. She really went into depth explaining the dystopian world, each faction of society and their extremist ideals, etc. It really stirred up my love for the book again. I actually read it several weeks ago and was planning to do my review immediately after but I've been procrastinating ever since then. I could write an analytical essay on this novel, it had that much of an impact. Anyway, enough of me explaining why I took so long to write about Divergent.

Divergent is set in a dystopian world - a city (which used to be Chicago) that is now fenced off from the rest of the world. The society is split up into five factions that correspond to personality - Abnegation (The Selfless), Dauntless (The Brave), Candor (The Honest), Amity (The Peaceful) and Erudite (The Intelligent). The main character is Beatrice (or Tris as we know her later), a 16 year old girl who was raised in Abnegation. Abnegations are only allowed to look at mirrors every three months. They eat plain food (never had hamburgers or cake), and they feed the factionless. Beatrice has never felt truly at home in her faction. Complete selflessness isn't exactly second nature to her, even after almost sixteen years of training.

Every year there is a Choosing Ceremony, for the kids who turned 16 that year. At the Choosing Ceremony each person is allowed to choose whether they will stay in their faction of childhood, or transfer to any one of the other factions and leave their families and past lives behind. But before the ceremony, each person must undergo the Aptitude Test. The result of the Aptitude Test determines which faction each teenager is most suited to (according to the decisions the person makes in different scenarios), regardless of the faction of birth.

Beatrice ends up with an inconclusive result. This is rare and dangerous for her, because that means that she is Divergent. Being Divergent means that you are suited to more than one faction - Beatrice's Aptitude Test outcome concluded that she could be in either Abnegation, Dauntless or Erudite. I won't tell you why exactly it is so dangerous, but it certainly fuels the direction of the Government. Erudite has been ferociously feuding with Abnegation, so for the Choosing, Beatrice rules out Erudite because she hates them. At the Choosing Ceremony, she decides to transfer to Dauntless. By the way, the Choosing Ceremony itself is quite the spectacle. I won't spoil it for you, but I think it's pretty cool.

Sorry for rambling on for three paragraphs, I haven't even started to talk about the main part of the book.
You should know that kids that leave their families and old factions behind, aka "transfers", are deemed traitors. Only for one day every year will they be given the opportunity to see their families again.
The main part of the book is about Tris' initiation process for Dauntless. The initiation process happens differently for each faction - for Dauntless however, it is a brutal competition, because there are only a limited number of spots available once initiation is over - by the end of it, the losers who don't place on the top of the leader board will be either factionless or dead. You don't want to be factionless, let me tell ya. It's like being homeless.. but much worse.

The Dauntless initiation process is violent, physically and emotionally. I won't go into it, but it is action all the time. There is never a dull moment in this book. Scenes will smack you in the face, consistently and relentlessly.

The characters are bloody marvellous. We have Four - Tris' faction leader and love interest; her brother, who also transferred out of Abnegation, but into Erudite; her mother who has a very interesting backstory of her own; and all of Tris' new friends she makes at the Dauntless compound.
There is a bigger story that is woven in the clouds above Tris' immediate goings on, a bigger story that Tris becomes an instrumental part of.

The ending is so jam-packed with physical and emotional strain. If you hadn't been engrossed from the outset, you will be by the end, because I was. The things that happened, the bombs that Roth threw at me shocked me, really shocked me. My heart was racing, the tears were streaming, and I was so distraught and upset and then suddenly ecstatic all within minutes. I'm just gonna spit it out: people will die.

I was very impressed by Veronica Roth's writing. The short sentences allowed me to read through the novel pretty fast, and this writing style definitely packed a punch. I loved it immensely.
Did you know it's becoming a film? I don't think they have cast anyone yet, but I hope the actress that plays Tris does her justice! I think Saoirse Ronan would be perfect, but that talented girl is a very, very busy young actress. I hope they ask her to audition though. I really think she could embody Tris better than anyone.
The sequel, Insurgent, is being released at the start of May, 2012 - I'm definitely getting my hands on that!

Saoirse Ronan!?! I definitely agree! Ever since The Lovely Bones and Hana. She'd be wonderful to play Tris.

I'm glad you liked this book too, It deserves more recognition. It is truly a wonder.

This book has been on my shelf for ages and I still haven't read it! I'm almost afraid to now because of all the popularity. I'm afraid it can't possibly live up to the hype! Lol. But obviously, I'll be giving it a go at one point. Hopefully soon!

Stopped by from the Saturday Situation!

To be honest I never read the synopsis until now. :p It sounds really good though, thanks for your fab review!