my thoughts on: mini shopaholic by sophie kinsella 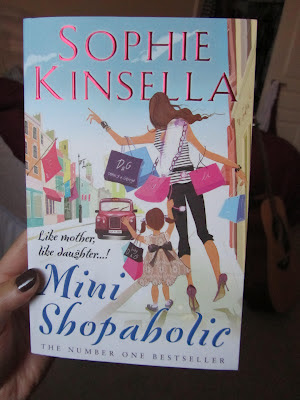 It's a wonderful feeling, reading a book for the first time, reading the last page of a story and finishing it for the first time. Nothing compares.
That is why I'm sitting on my bed at 2am, wide awake and scribbling in a notebook, trying to somehow articulate all of what I'm feeling right now.

For the most part, Mini Shopaholic was not like Sophie Kinsella's other novels, or even like the other Shopaholic books either. Sophie Kinsella fooled me for the first two thirds of the book - she made me think Mini Shopaholic would be a big disappointment (and in a tiny way it was a bit of a disappointment). Becky was up to her usual antics - deceiving everyone, keeping secrets, telling fibs left, right and center and satiating her hunger to shop. I was halfway through the book and felt disappointed that her character was still the same as ever, disappointed that Becky hadn't grown or matured since the first book. She had though, it was just difficult for me to see that at first.


The story was also a little on the boring side for me... that is until the FUN BEGAN! (The last 1/3 of the novel). I had pretty much lost hope in Becky - she was still as vivacious as ever but up to all her old tricks. I mean, it took Sophie Kinsella six books to introduce a character that had the guts to tell Becky she is a shopaholic. Her husband, her best friend, and even her parents should've noticed the extent of Becky's shopping addiction, yet it only took a stranger to notice it in a few hours. But anyway, the final third of the book was the best freaking bit. It was glorious. GLORIOUS!

The plot seemed to plod along for most of the book - Becky being a mum now, trying to quell her shopping tendencies during a time of financial hardship, trying to be a responsible parent to Minnie who seems to get wilder and wilder every day, trying to get Luke on board for making another baby, and trying to organise the biggest and best surprise birthday party for Luke with a very limited budget. There wasn't much romance and nothing really excited me for the most part. It was still a Sophie Kinsella novel though, so of course there were LOL moments here and there.

Loads of secrets are kept - I'm not even going to attempt to list all of Becky's, but Luke had quite a few as well, e.g. the reason of his falling out with his biological mum, Elinor. If you've read a Shopaholic book before, you'll be familiar with how Becky tends to get herself into stressful situations. Ridiculous, in-over-her-head, OMG-Becky-you-are-bloody-screwed situations. This lasts for a good majority of the book, so I was literally sitting there freaking out for Becky and stressing out with her for a good couple of days. (I wasn't very excited about the story during this portion of the book so I wasn't avidly trying to get through it).
You can't imagine how relieved I was to get into the final stretch of the story - the last third of the book got interesting and it got interesting FAST. There was a whirlwind of emotion and excitement for Luke's birthday party. There was still a lot of stress involved though, I mean, imagine keeping your husband's party secret from him whilst the news of it is broadcast across the city! (Literally millions of people knew about the party whilst Luke was still in the dark. It was hilarious.)

Anyway, the end was just amazing. It was very, very good. But I couldn't give this book my normal Sophie Kinsella five-star rating. She strung me along and for so long I was feeling really sad, thinking I'll have to give it a 3.5. Thank goodness Sophie Kinsella knows how to write a darn good story because all of what happens in the end made me so happy, it just totally redeemed itself.

Wow, it is such a long time since i have read this book. I am sure i bought it when it was released. I adore the shopaholic series and was so happy to see a new book. I totally agree with what you said, and i thought the last parts really made up for everything. I loved this book :) Thanks for sharing, it has brought it to my attention again and reminded me i must get it off my sister who borrowed it ages ago haha. lovely review, beautifully written xx

Awesome review! I hate books that are boring throughout the beginning, you would think they should be more intense, to hook in the reader? Anyways, I haven't read any of this series, but I do hope to make time for it before the summer ends!